Features Buddy Rush: The Legends boasts quite a few remarkable features that help add on to the already awesome vibes of this RPG, one of which we particularly loved – the PvP (Player vs. Player) Arena mode that lets you battle it out with other players online! We loved the ease of the battle matchmaking and being able to go up against a real person. This game also features a fun story-like mode called Mission Mode that puts the player on a quest to save the Kingdom with over 13 different chapters and 122 missions. Another feature that’s great about Buddy Rush: The Legends was the level of customization offered – players can customize their “Buddy” with tons of different types of gear that also increases their Buddy’s stats. According to the developers, there are over 150 variations of different buddies to use and collect in battles. There is also a Raid Mode that pits players against tough bosses in attempts to earn better loot. The only con to Buddy Rush: The Legend was the amount of time it took to download the additional Resources after installing the game. It kept crashing or failing to fully download the Resources, but eventually (after several hours!) it finished and we were able to play it. 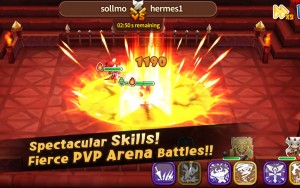