Pokemon Go can be daunting for both players new to the Pokemon franchise, and even veteran players unfamiliar with the differences from the normal Pokemon gameplay. This page highlights some of the bigger Things Pokemon Go Doesn’t Tell You about controls, mechanics, and other useful tips. 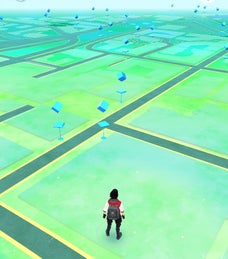 If you happen to live, work, or just be in an area near one of the PokeStops, you’ll notice that the color changes from blue to purple once interacted with. If you hang around the area for a bit, you’ll find it goes back to its blue color after 5 or so minutes (times can vary), allowing you to easily stock up on Poke Balls, and gain 50 xp a pop, which is useful if you find yourself stuck someplace where Pokemon are not appearing.

“I see now that the circumstances of one’s birth are irrelevant. It is what you do with the gift of life that determines who You are” – Mewtwo

Leveling Pokemon doesn’t work the same as other games, since you don’t battle Pokemon in the wild. Instead, each Pokemon caught will come with a few of that Pokemon’s candy, as well as Stardust. Both of these items will need to be gathered to train your Pokemon, and the candy in particular is needed to evolve Pokemon.

An easy way to obtain more candy is to transfer any duplicate Pokemon you catch in the wild. Find two Squirtles? Transfer one (which is the same as letting it go) and you’ll be rewarded with a Squirtle candy. It’s important to never pass up a Pokemon you find – even if you already have that one!

Pokemon and PokeStops in Motion

Whether you’re on a bus, in a car, taking a train, or whatever — you’ll find that you can still play Pokemon Go on the go and your avatar will faithfully run down the streets to keep up. This can be both a blessing and a curse, because you’ll often pass through several potential PokeStops or Pokemon.

It’s important to note that when interacting with PokeStops, if you leave the area, you won’t be able to finish interacting with it — and interaction is often best saved when you’re slowing down or stopped in a moving vehicle. However, any Pokemon that is encountered and engaged will stay with you, letting you catch them at your leisure (so long as they don’t flee).

And of course: please don’t play Pokemon and drive. 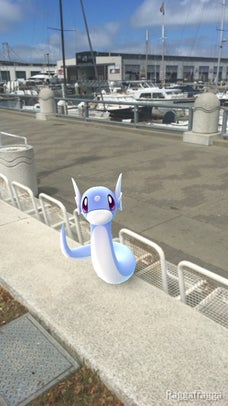 As exciting as exploring new and unknown places for Pokemon are, you won’t have to brave the most dangerous places on Earth to find rare Pokemon – instead your personal level will dictate the rarity of Pokemon that appear. To start, you’ll often encounter basic pokemon (Zubats, Charmanders, Weedles, etc) but as you gain in level, there will be a better chance of finding both Pokemon with higher Combat Power (CP), and rare Pokemon in general.

Tougher and rarer Pokemon will often be harder to catch – a green ring means an easy catch, yellow harder, and then orange and red. Difficult Pokemon may often break out of a Pokeball, or even run away. Consider using Items to make it easier before trying against these Pokemon.

When trying to incubate a Pokemon Egg, you’ll have to travel a distance of several kilometers (varying from 2 to 5 to 10). While you might be tempted to simply drive the distance, there’s more to it than distance traveled. Pokemon Go uses both your phone’s pedometer as well as the GPS to calculate how far you’ve actually walked, and appears to limit your distance traveled if it clocks you going at high speeds. Distance traveled is still counted fairly accurately if done on a skateboard, as long as you don’t go too fast.

Get Free Items for Defending Gyms

Once your trainer is level 5, you can finally visit Pokemon Gyms and battle against other trainers. If you visit a Gym with your team’s color – or take over one of the opposing color, you can store your Pokemon there and become a Gym Defender. Immediately thereafter you can check the Shop tab and click on the shield icon to access your Defender Bonus for free PokeCoins and Stardust. Check back every 20~ hours (so long as your pokemon have not been dethroned) and to recieve more (the amount may vary depending on how many Pokemon you have in the gym, or their CP).

Battles Are Not Turn Based 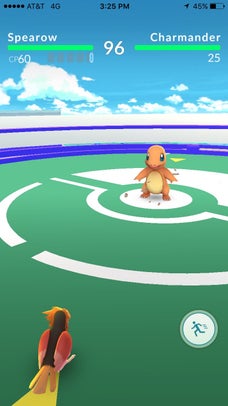 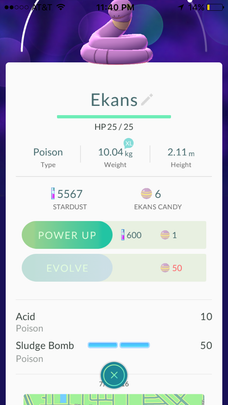 Contrary to most Pokemon games, Gym Battles in Pokemon Go are not turn based – though attacks can’t be literally spammed either. To attack, simply tap the screen, and your Pokemon will deal its first attack as soon as its able. To deal a special attack, you will need to hold down on the screen and release. In order to perform a special attack, you will need to charge the meter below a pokemon’s health until a bar is full – different special attacks have different meters. To dodge, swipe to the sides before the attack hits. You can tell which move is the Pokemon’s basic attack and which is its special by the order the moves are listed in. For example, this Ekans will use Acid, and will only be able to attack with Sludge Bomb when one or both of the bars are filled by using Acid first.

Pokemon Close By Can Be Summoned

When on the map, in the bottom right corner you can find a tab that lists any nearby Pokemon. Most of these Pokemon should have a number of 1 to 3 footprints under them, with 1 equaling close and 3 equaling farther away. However, sometimes you may find that a Pokemon listed has no footprints – if this is the case, track that Pokemon by tapping on it, and it should pop up on the map in a few seconds. 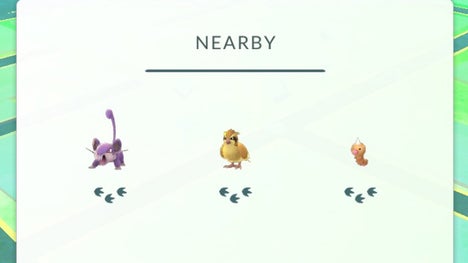 You can also track any nearby Pokemon by tapping on it and monitoring the list of nearby Pokemon. If you are moving closer to your selected target, the box in the bottom corner will start blinking when the Pokemon moves closer to the top of the list, and have less (or more) foot prints.

Note that simply seeing a patch of moving grass on the map doesn’t always mean a Pokemon will immediately pop up if you’re close enough – but some will often appear if you walk around the area long enough.

Make the Most of the Battery Saver

Pokemon Go includes an option in the settings to initiate a Battery Saver mode, but it doesn’t really explain what that does – in fact, simply turning it on won’t do much of anything.

To make use of Battery Saver, once turned on, simply turn your phone upside down, and the screen will darken to display a faint Pokemon Go logo. The game will still be on, and will still track your movements – you just won’t see it. However, you will still get a notification or rumble if you approach a Pokestop or a Pokemon appears, so you can quickly pull the phone out of your pocket to interact!

When trying to capture a pokemon in the wild some creatures may be harder to target than others – especially if they are flying or are located farther back in the screen. If your Poke Ball misses the target and falls to the ground nearby – you can pick them back up by tapping on them to recover the Poke Ball and avoid wasting tons of Poke Balls on one dodgy pokemon!